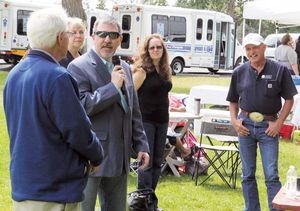 Most of you know that since my election in 2004, I have been asked to serve on a number of boards and commissions.  One of those organizations is People For People (PFP).  PFP is a non-profit 501 (c)3 organization committed to serving people throughout (Central And Southcentral) Washington State since 1965. They provide transportation services for the general public and special needs population, employment and training services, and 2-1-1 Information and Referral Services as well as Brokered Non-Emergency Medicaid and Transportation related services.

Since 2013, I have had the distinct honor and privilege of serving as Board President for PFP.  Recently, the organization hosted a BBQ at Blue Heron Park in Moses Lake, WA to kick-off its year-long celebration of 50 years in operation.  Fortunately DeLeesa and I were able to attend and I was asked to say a few words to the crowd and over the radio (local station was broadcasting from the event).

It was great to visit with Moses Lake Mayor Dick Deane and State Representative Tom Dent (R-13); however, most enjoyable was getting to interact with the employees and staff of the People For People family.  They truly are what makes this organization great!

“I can't tell you what a great organization People For People is,” Sunnyside Mayor and People For People Board President James Restucci said. “I get to speak with the employees and I love the fact that they tell me they love to come to work everyday.”

You can read the full story at the Columbia Basin Herald website by clicking on the link above.

Later this year in October, the organization will have its larger celebration in Yakima where I will serve as MC.  We have a number of guest speakers including two members of the community who were original board members from 1965.  Also, Mayor Micah Cawley of Yakima has approved my request to proclaim September 2015 as People For People Appreciation Month in the Yakima Valley.

Lot's of exciting things planned for the 50th Anniversary and this was just the start.

Admin Note: I know this site has been pretty much dormant for quite some time; however, with all the irons I have in the fire it has taken a back seat.  I am going to try to change that by posting a few articles each month, but don't hold me to that 🙂

James A. Restucci is the author of this blog. This work is licensed under a Creative Commons Attribution-NonCommercial 4.0 Internal License.
View all posts by jim® →